Heartburn That Often Occurs in the Morning | MedGuidance

Heartburn That Often Occurs in the Morning

Are you experiencing heartburn especially in the morning? Is it frequently occurring or not? Heartburn is a condition wherein a burning sensation is felt in the upper and central part chest, usually behind the breastbone or the sternum. This is due to the stomach acid that is blocking the esophagus or the food pipe. It may get worse by lying down either flat or on the right side. The condition sensation may be due to many factors. Read on and learn about the reasons behind this condition. 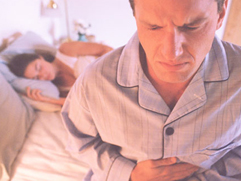 Why Do You Often Experience Heartburn in the Morning?

Some factors that can trigger the heartburn especially in the morning include:

Several positions may greatly affect acid reflux. Standing or sitting in an upright position will make the liquid more difficult to come back to the esophagus. Lying down will cause the acid to stay, leading to reflux especially in the morning. This condition may worsen until the body is in an upright position for a certain period of time.

The process of digestion is aided by the production of saliva as well as swallowing. These occur primarily when activities such as chewing are being done. Sleeping doesn’t allow any of these actions. Thus, it causes the acid to stay longer in the esophagus and leads to heartburn upon awakening. You should pay special attention to certain foods and drinks which can can stimulate and increase the secretion of acid in the stomach. Some of the examples include:

There are some medications that can cause worsening of heartburn. Those drugs taken at night including anti-inflammatory and sedatives can relax the muscles and cause expulsion, leading to reflux in the morning. Some common used medications include aspirin, ibuprofen, and naproxen products. It can also leave a long time for the drugs to stop functioning due to the time of ingestion.

Foods eaten at night should not add to the acid reflux problem. Avoid eating greasy, spicy, and other acidic foods. Unlike in the morning, the body will have limited time to digest foods before going to sleep. What’s more, the horizontal position during sleeping can greatly contribute to the severity of heartburn in the morning.

The use of cigarette can greatly affect the functioning of the esophagus, particularly the LES. It can relax the stomach, allowing the acid to get back or reflux into the esophagus. The same mechanism occurs during the consumption of foods that have high-fat contents.

Obesity may increase the pressure present in the abdomen. This boost in pressure may cause the stomach acid to reflux into the esophagus.

Pregnancy causes an increased pressure in the abdominal area and cavity. This will greatly affect the functioning of the esophagus, leading to reflux.

How to Minimize Heartburn in the Morning?

Experiencing heartburn upon waking up may be very frustrating and uneasy. It may hinder your day to day activities. However, there are several techniques available that will help lessen the symptoms of acid reflux.

Studies revealed that elevating the head during sleep is an effective way to reduce acid reflux. This is much more effective for those who are experiencing severe heartburn during the morning or at night. You can place a pillow underneath your head or keep blocks under the bed so that your head is much higher or elevated than your stomach. This will hinder the stomach acid from traveling to the esophagus during sleep.

By using this technique, you’ll be able to get better and sounder sleep without worrying on waking up with a burning sensation in the esophagus and chest area.

Always keep an eye on the portion of food you’ve eaten for the day. Also, take note of the time you eat for dinner because this will affect the time that you will have to sleep. It is important to give at least three hours interval. This will allow the food to be fully digested before going to sleep.  Never ever go to bed with a full stomach. This will lead to abnormalities in the esophagus which will worsen the condition.

Also, watch out for your sleeping position. The flat-lying position will cause the stomach acids to transport easily to the esophagus, leading to heartburn.

3.  Drink lemon water upon waking up

Hydrate yourself especially upon waking up to prevent dryness of the throat, which often leads to acid reflux conditions. Drinking water with lemon can help reduce the symptoms of heartburn. This is due to its capacity to lessen the inflammation and to activate the different systems of the body after a very good sleep. It can also balance the acidity present in the stomach ,which will then decrease the symptoms of heartburn in the morning.