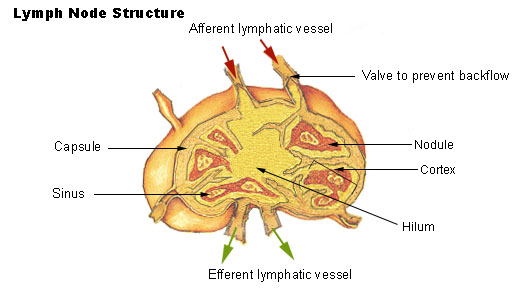 If a few regions around your neck get swollen every now and again, there might be an issue with the lymph nodes in your neck. Lymph nodes form an integral part of the human immune system and highlight issues of the body. The nodes are regional in nature and the enlarged nodes in each region indicate abnormalities within that region. They aren’t visible normally and only make an appearance when they get swollen.

What Are Lymph Nodes?

Lymph nodes are very useful for the human immune system as they are capable of fighting off infections. These round or oval shaped nodes are very small and soft and are present in all parts of the body with a lymphatic chain connecting all of them just like the case with blood vessels. At their core, the lymph nodes carry immune cells known as lymphocytes with a capsule of connective tissue covering the nodes. The lymphocytes give the lymph nodes the quality to fight against harmful outside particles and microorganisms.

Lymph nodes in the cervical region are found around the jaw’s lower border, at the front and back of the ears and close to the neck’s bigger blood vessels. They collect lymph from vessels that drain skin of nasal cavity tissues, pharynx, face and scalp.

The nodes present in and around the arms, in the deeper chest tissues and close to skin surface are considered axillary lymph nodes. They collect lymph from the vessels of arms, breast and upper abdominal walls.

The inguinal region is the one in which nodes are present at the front and back of the legs, the outer side of human genitalia and the lower walls of the abdomen. They collect lymph from these same regions.

The nodes present in the abdominal cavity actually occur in the form of chains around the major artery branches that run through the abdomen and the intestine.

Nodes present in the thoracic cavity are found around the bronchi and the windpipe and in between the lungs. They collect lymph from this very region as well as the inner thorax wall.

Here is a video where you can get direct information about lymph nodes locations.

The basic function of the lymph nodes found in various regions of the body is to indicate and fight off bacteria and microorganisms. Swollen lymph nodes often indicate the presence of an infection or another issue in related region.

There is a possibility that a few cells from a cancer break away and then metastasize in the lymph glands close by through lymph channels. In such cases, the cancer cells find a breeding ground in theses lymph glands which results in swollen glands. For example:

Inflammatory diseases like lupus and rheumatoid arthritis can also cause swelling of lymph nodes.

There can be other causes of swollen lymph glands as well like sarcoidosis, arthritis, GLS (Genetic Lipid Storage) disease, HIV, TB (Tuberculosis) and Kawasaki disease. However, the possibility of swelling of lymph glands as a result of these conditions is highly rare.

In order to treat the swelling of lymph glands, the fundamental cause requires treatment. Once the cause gets treated, the lymph gland would return to its normal size. Still, you should visit your doctor quickly if: