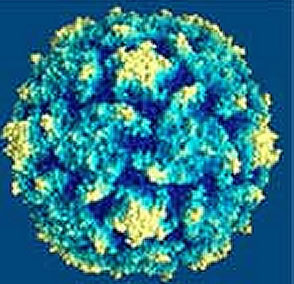 EpsteinBarr virus (EBV) belongs to the herpes family. It is among the most common human viruses. Studies show that 95% of adults have antibodies against it which means that it has affected them at least once in their lives. In most cases the EBV infection goes almost unnoticed or with very mild symptoms. However, sometimes it can be a sign of more serious conditions, even several types of cancer.

What Is the EpsteinBarr Virus?

EBV is a contagious germ which spreads from person to person and can be met in every part of the world. It lives in human lymphocytes and other cells, especially in those liningsof the nose, mouth and tongue. Although not destroying it completely, the human immune system fights EBV effectively. Some viruses remain living in the lymphocytes for the rest of our lives–the condition is known as “latent” infection. They may reactivate at some point, but they do not do much harm if the immune system is strong enough.

How Does EpsteinBarr Virus Spread?

EVB spreads predominantly by bodily fluids, especially saliva. However, it can also be passed through semen (by means of sexual contact) and blood (through blood transfusions or transplantations).

EVB can also spread by objects such as a glass or toothbrush that an infected person has used. There is no evidence that disinfecting the objects kills the EVB germ.

When you first get infected with EBV, you can transmit the virus for weeks without even knowing because you don’t experience any symptoms. This is because EBV stays inactive in your body, which means the germ is in alatent state. If it reactivates, you can potentially spread it, no matter how much time has passed since you first got infected.

What Diseases Can Epstein Barr Virus Cause?

EBV is spread by close contact between people. When you first get infected, you will not necessarily have any symptoms or you can experience a number of different symptoms. Complications after primary infection are not common but can be fatal if not treated in time. Some of them are:

The usual symptoms of this disease include extreme fatigue, tonsillitis, a sore throat, fever, enlarged lymph nodes on the neck. Although the throat inflammation and fever usually subside in two weeks, the fatigue can continue for months.

With young children, EBV is usually accompanied by ear infection, diarrhea and other gastrointestinal problems and cold symptoms, in addition to common symptoms of mononucleosis.

In more rare cases, primary EBV infection can lead to some neurologic conditions such as guillain-barre syndrome and meningoencephalitis. In rare condition, the EBV can also affect blood and coagulation systems, causing anemia and other blood-related abnormalities.

Usually located in the jaw,Burkitt's lymphomais the most common malignant tumor among children in equatorial Africa. Studies have shown that great majority of Burkitt's lymphoma in that region are caused by EBV-infected lymphocyte.

Although rare in most parts of the world, nasopharyngeal carcinoma is among the most common cancers in southern China. Multiple studies have definitely linked this illness to EBV. However, only few Chinese people who have infected with the virus develop this disease.

Post-transplant lymph proliferative disease (PTLD) usually affects people who take immunosuppressive drugs after an organ transplant. EBV has been detected in most PTLD cases. Symptoms can range from an increased number of lymphocytes in the blood to some blood-cell abnormalities, for example, B-cell lymphoma.

EBV is also linked to the development of some rare illnesses related with abnormal growth or function of certain blood components. Hemophagocytic lymphohistiocytosis and lymphomatoid granulomatosis are typical examples of rare hematologic conditions.

What Are the General Symptoms of Epstein Barr Virus Infection?

Sometimes the symptoms are so severe that the pain in the throat can obstruct swallowing and the body temperature may reach 102 degrees F. Accompanying symptoms may also occur, including rash, pain in the eyes, photophobia, enlarged spleen and liver infection.

When to See a Doctor

Mild cases of EBV can be treated at home. However if you have prolonged fever, severe headache, difficulty in breathing, abdominal pain or jaundice, you should seek professional help.

How Is an Epstein-Barr Virus Infection Treated?

At present, there is no cure for EBV infection. Treatment is aimed at relieving the symptoms so that the body grows strong enough to fight the symptoms by itself and avoid complications. Effective treatments include:

Watch the video below to see the most common mistakes people make when treating EBV: